Matt Wilkie BPO 24hours scam. Another "criminal" on Matt Wilkie's hit list that has been "brought to justice" Below is a screenshot of a blog Matt Wilkie has published on blogspot.com  for the purpose of once again to slander the competition he feels responsible for his failure to establish a BPO business working out of his house in Minglanila (Cebu island) in the Philippines.

Of course, no guts to sign his entry, the picture is his, and the "other call center" he doesn't name is his imaginary business of BPO. As of the typing  of these  lines he just came up with another entry on Shawn Peterson telling us this:

Matt Wilkie goes on and name a few businesses that have been scammed by Shawn Peterson by impersonating him (Peterson) to look like being the one doing the talking against himself! Usual rip-off and tactic of a psychopath. Hundreds of Twitter and FB pages under a different ID for his purpose of intruding your friends and family and spread his lies. Here is what he said on his blog: (Look at the bottom of the entry)

"What has happened though is Verengo solar are stuck with me as I deliver so many leads for them they won't drop me even though I could even be funding terrorism with money out of their solar payments. We are talking over $20,000 a week people! Not small change and could be dropping straight into the pockets of Militia in Pakistan.

Are Verengo aware of this? of course they are but the money is rolling in every week and doesn't stop. They have quashed their competition by using me as I under pay call centers and often disappear without payment.

Ask AGC = Lost 1 weeks money for their agents as I disappeared.
Ask 724Care = Lost $8,500 I never paid after disappearing.
Ask BPO24hour.com = I underpaid them for months.
Ask Avidroff = Lost 3 weeks payments that I never paid, but then I poached their agents and HR manager and her brother who also worked there the "Aviso's" who also stole data dialing lists. I may have forced yet another center into bankruptcy haha.. as the data alone was worth over $5,000
5 Small Philippines centers = Can't ask them as they all went bankrupt!

But as long as I have the support of Verengo things won't stop. I am making a fortune by crippling call centers and taking all the money for myself. But you may wonder who's working for who here as I keep the door with Verengo well and truly open by paying off staff a percentage of my sales.

We questioned all of the above companies (except of course BPO24hour.com that is Matt Wilkie) and no one came back to us to confirm the allegations against Shawn Peterson. To the contrary, we have complaints from agents that Matt Wilkie has used that he has never paid. In effect, it appears that Matt Wilkie is acting as an "in-between" among clients and free lance telemarketers as a trustee of the payment received from the client and pay the agent. If and when he wants of course!.. Let's see how he describes his role below. This an excerpt from his blog  Matt Wilkie BPO 24hours scam.

We have done an extensive search of the accused and all we came with was nothing. Just what Matt Wilkie is saying, including a report he filed on rip-off.com  anonymously with no value. No one is supporting him, not even the coalition.  A real victim with real facts shouldn't be afraid to sign his statements. That's not the case here with Matt Wilkie.

Our investigation shows that:

Matt Wilkie is a pathological liar with countless personality disorders including  incurable mythomaniac plotter and scammer, assumes badly his failures and living in a third world country with no way out. Below is another screenshot for another of his blogs (he has about 120) where shows a guy that struggles financially to repair an old car he owns in the Philippines portrays himself as big shot and wealthy in the industry. Here is what he said:

Lies and damn lies! Noticed? He no longer introduces himself by his real name. Just an unnamed owner and CEO Challenge him to bring the slightest proof that he was anything in his life other than a construction worker, handyman, security guard and now a scammer trying to make it in the Philippines hoping the "big one" (scam) will some day come to fatten his bank account and return the UK. No success so far! Matt Wilkie BPO 24hours scam.

Our informants are telling us a different version of the facts that reading some of  the lines in his blog isn't that hard to understand. (Pasted from his blog) Matt Wilkie BPO 24hours scam.

"This is when things started to get worse as he recruited one of our HR managers and also her brother, he stole dialing data from our center and both left our company. In the last few weeks they then with the help of Shawn Peterson stole 20 of our best agents by offering high salaries."

It's Michael Turner all over again. Matt Wilkie does not understand first world business that is based on cut throat competition that the aggressive one succeed.

Next Week. We'll explain you how Matt Wilkie became the parasite of the expat and sexpat community in the Philippines. We'll explain you what Shawn Peterson knows about Wilkie and why he dumped him just paying half of the money he agreed to pay, which it was nice of him (Peterson) to give advance money to a thieve like Matt Wilkie. 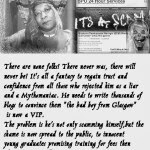 Matt Wilke did it again! The voices last night told him to go look for new offices in Cebu because the place starts getting smaller. So there he goes, in the middle of the night, jumped out of his bed and went to the address the voices directed him. And here is what he told us on his blog posting only a picture, the one of his car, that make us wonder, Does the new offices will be built in his “new car” OK, Let’s not be gossipers and read Matt’s Wilkie’s side of the story. Click on the image to read the story